skip to main | skip to sidebar

I missed 5 nice weeks of my sweet pregnancy just out of busy days of work and home. Thanks God I am in a very healthy mood that let me continue my daily schedule same as before, I'm still driving, walking, cooking and preparing baby's and Rozana's new bedrooms.
In my last check-up I was waiting for another sonography to monitor his improvements but the doctor said he is OK and there is no need to enter his private world ;)
This month was full of precious news, first of all my best friend Khale Sanaz became mother for the first time excatlt a day before Rozana's birthday. It's very odd that her destiny and mine are this much tight and bound to each other. It's more than 21 years which we are experiencing same events. She wasn't in Iran and unfortunately I wasn't beside her at those moments, same as Yashar's birthday, but I became damnly happy of feeling her happiness. Also last week Nikan was born. Her parents are close friends of us and I know tham for more than 20 years. They are not in Iran either and ... and the best and the most challenging news came last week which is making our new life route.
I changed Rozana's wall paper, bought a new bed and table for her and brought the old ones to the prince room. When everything is finished I'll publish the photos.
Last week we went to a one-week trip to north of Iran with my uncle's family. Its was very good and my sixth sense sure me it wont repeat at least in near future. We bought a cake and celebrate Rozana's birthday in Lahijan park and also some days ago, Khale Hamide baked a cake and celebrates it with her cute children again. The photos are shown below. 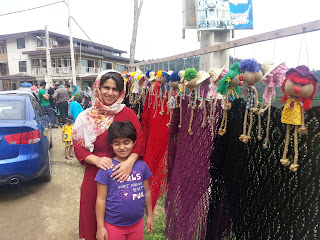 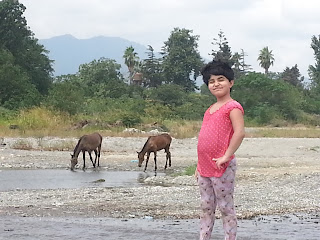 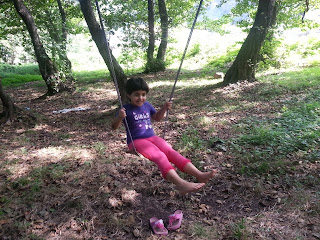 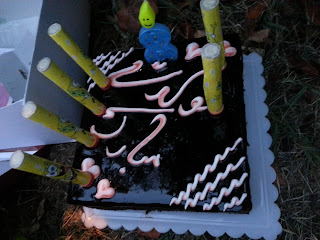 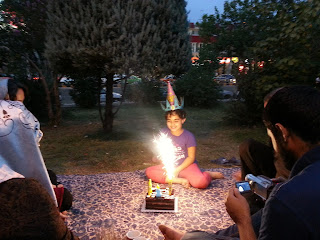 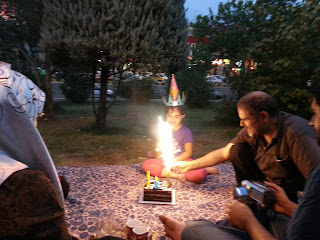 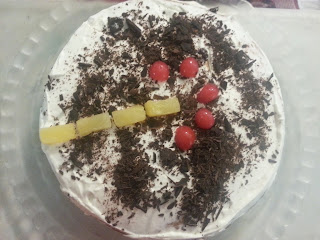 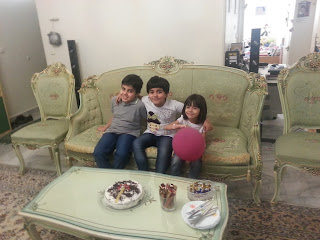 and this is my nice Tania: 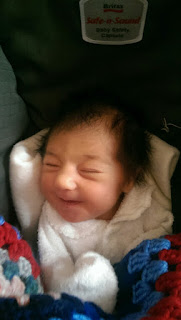 and this is Nikan : 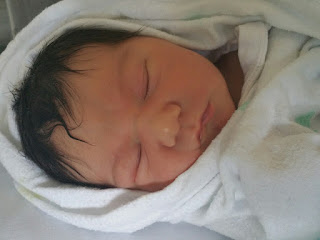 Posted by Unknown at 9:36 AM No comments:

I am getting heavier than before and it means my little prince is getting bigger. We are discussing about a suitable name for him. One of my friends who is a kid's English teacher says a research have been done about the effection of the names on the children improvement. The result was amazing, those whose names are special and haven't been heard a lot are attracting their teachers more than ordinary names. Teachers, unintentionally, pay more attention to them so it results in better education !!!
I should confess that the names which are suggested by Rozana is better than Mehrdad's and mine :D
I become tired when I go to work and I am busy about buying a new bedroom set for Rozana and giving hers to my son. KhalehSanaz is waiting to hug her little princess in a month and I wish I was by her at that moment. It's funny, we were together during last 21 years and now I can't be with her. It happened during Yashar's birthday too. I wish I was there but I couldn't. Actually I missed that wonderful experience ...
Anyhow, everything is OK generally and thanks God.
Posted by Unknown at 8:57 AM No comments:

We are in week 20 as I wrote on the title. last week was full of emotions for me. I changed my gynecologist, he was traveling abroad all the times and I was tracing him. The new one is a kind woman who has an office in the hospital I'm planning to give birth to my baby.
Anyhow, two nights ago I went to pass my sonography, it was for checking anomaly and also the gender. Rozana went to her skate class and then we went there. It was about 11 PM that they called my name!!!!!!!! The doctor was very kind and talked with Rozana a lot. He said it was very necessary to pass this test with the elder sister. Surprisingly it was very similar to Rozana at this phase. I am sure they will look alike each other very much or as Khale Sanaz said they will look alike Mehrdad very much!!!
He checked all the organs, the head, eyes, lunges, heart beat, feet, hands, back bones and ... my baby is a BOY. The doctor said you should ask his father a gift, I didn't understand his language so I asked is she a girl and he answered you should ask his father for a gift again, after some seconds I remembered that it means you are having a boy. Not in my country but I think in all the world it's like this. The general believe that having a boy is a gift or a chance...
We went to my mom's house at about 11:45PM. I remained in car and Rozana went to take the food she had cooked and also tells her the news. I was hearing her voice ... She was really  shocked. I hadn't seen Rozana as happy as that night before. She was jumping and laughing with a loud voice and was talking non-stop to express her feeling for my mom. She said my brother is as big as an orange and all his organs are complete and I have seen them. She was jumping and hugging my mom times and again. She was damnly happy. The moment we reached home (about 12 PM) she called Mehrdad's family to tell them the news. Last week Mehrdad's mom had a dream of a new boy and Rozana told her the dream becomes true.
All these moments was like a blink of an eye.I started texting my friends and families who were asking and then I felt crying.
Maybe I shouldn't write this feeling here, but if one day my boy was able to read these lines I ask him to think about them. I started crying after observing Rozana's happiness. She was walking on the clouds and I was thinking about the future, When they become adults and when Rozana ask for his protection in the case of Mehrdad and I absence. Will he understand how adorable he was for Rozana before his birth? Will he understand one of the main reasons of having him was continuous requests of Rozana for having a sibling? ... and lots of more questions.

I am happy of having the new angel, he is going to be the prince of my own family, having Mehrdad and Rozana is completing this prosperity, also having my parents and families and friends who are always very kind. Thanks the generous God for giving this much attention to me.
Posted by Unknown at 10:08 AM No comments:

This is the last week in Ramadan :) and my little angel is still growing. I read an article about the size of him/ her and imagine how big he/she is, just as big as a mango !!! I have a live mango in my belly which is going to make a world of him/her. Really its a miracle. Rozana is acting very gently, taking care of me and listening to my tommy noises times and again and is changing her sleeping attitude, She comes with me to bed, hugs me and talks for a while . Then puts her little nose beside mine and keeps me tight, then I go to sleep and Mehrdad calls her for going to her bed. You see, she is making me asleep not me !!! Really she is clever. This time of motherness is very sweet, I have an angel in myself and another one who is caring and kind.
My little angel is making sking these days and I don't know which vitamins are urgent to be provided, so I keep on eating nuts and fish and milk and protein as before. I should lessen my daily tasks and wait for the time of hugging my children together.
Thanks God and hope everything goes as perfect as before.
Posted by Unknown at 10:17 AM No comments:

My new angel is as big as my palm... imagine, just a palm is inside me and is growing gradually to become my world. This miracle and the procedure is always sweet to be reminded. Also he/she is getting used to the noises around, let me guess what are those noises, It would be Rozana's non-stop talking :D, Mehrdad's  spoiling me, car horns in the traffic jam, cartoons, ... so they are not terrible :)  It's funny for me that how hungry I become during the day. We are in Ramadan and restaurants are not allowed to perform before evening and I should always have something to eat otherwise I will die out of hunger :))))))))) This eagerness of eating is surprising for me. There is something strange too, At my first pregnancy, I was counting the days to do regular check ups and use suitable vitamins, but this time I am sure that if I eat all the useful ingredients there won't be any trouble. even going to the doctor is not a necessity for me. I think I can do all the steps without problem. This much self-confidence is new but I can't resist.
I
Posted by Unknown at 9:56 AM No comments: